This post is part of a virtual book tour organized by Goddess Fish Promotions. The Literary Lobbyist will award one $25 and one $50 Amazon or B/W GC to randomly selected winners via rafflecopter during the tour. Click on the tour banner to see the other stops on the tour. 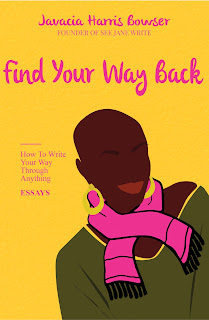 Award-winning freelance journalist Javacia Harris Bowser is convinced that writing is a superpower. She sees her life as proof of that, as her writing has helped her navigate marriage, crisis of faith, and body image issues. She also helped her beat cancer.

As a black woman from the south, Javacia has used the written word to explore issues of gender and race, as well as religion. Find Your Way Back is a collection of essays showing how Javacia has used writing to achieve some of her wildest dreams, like being a public speaker, having her own column, and being her own boss. The book also explores how her writing, self-love, and faith helped her overcome her worst nightmare: a cancer diagnosis in 2020. Javacia’s goal is to show readers how writing can transform lives, too. her. The book includes prompts to help readers begin their own writing journey.

This book is for the woman who has wanted to write since she was a child, but struggles to find the time or the courage to put her words on paper. Find Your Way Back shows that instead of putting writing on the back burner when life turns upside down, we should turn to it to help life make sense again.

– from “How does a feminist fight against cancer?

In the song “***Flawless” from Queen Bey’s 2013 self-titled album, we are given a clear definition of what it means to be a feminist, courtesy of an excerpt from Nigerian writer Chimamanda Ngozi Adichie’s TED talk, “We Should All Sean Feministas.”1 Feminist: the person who believes in the social, political and economic equality of the sexes. Merriam-Webster also defines feminism as “organized activity on behalf of the rights and interests of women.”2

But for me, those definitions only scratch the surface. Yes, I call myself a feminist because I believe in women’s rights and gender equality. But I also call myself a feminist because, simply put, I am obsessed with women and I am obsessed with being a woman. That is why, as a freelance journalist, I mainly write stories for and about women. That’s why in 2011 I started a website and online community for women who write and blog called See Jane Write. And that’s why I believe in brotherhood, really.

I feel an inexplicable kinship with almost every woman on the planet, regardless of age, race, or religion. It doesn’t matter if you’re the CEO of a Fortune 500 company or a cashier at my local grocery store struggling to make ends meet. Whether it’s a princess or a pole dancer, in my opinion, we are inextricably linked.

But after I was diagnosed with breast cancer in January 2020, I wondered if being a woman was as wonderful as I had always thought. My oncologist told me early on that after chemotherapy and radiation treatments, I would have to take the drug tamoxifen for five to ten years. The tumor found and removed from my left breast turned out to be “ER-positive”. That means cancer cells grow in response to the hormone estrogen.

When I explained why I needed a drug that would essentially put me into early menopause, my doctor said, “Estrogen tried to kill you.” Those words surprised me more than “You have cancer.”

Knowing that what makes me a woman, biologically at least, was the very thing that threatened to end my life made the ground beneath me shake. As an ally of the trans community, I understand intellectually that gender is much more than biology. But emotionally, I felt betrayed by my body and my femininity.

Despite the sexism that women can face at work, at home, at church, and even while walking down the street, I have never seen being a woman as a cross to bear. Of course, I was aware of the terrible oppression women and girls face in some countries, including the United States. But these stories and statistics only made me more fiercely feminist. He wanted every woman to feel that femininity was a blessing. But now, suddenly, it felt like a curse.

For months I tried to keep my diagnosis a secret, only telling a few close family and friends about the lumpectomy I had in February 2020. But as I got closer to my first day of chemotherapy, I knew I would have to share the news soon. with more people because soon I would go bald.

There was no chance I would run into friends at a networking event or at my favorite restaurant or wine bar. The COVID-19 pandemic had us all confined to our homes. But because of See Jane Write, I do live broadcasts on Facebook and post photos and videos on Instagram frequently. He knew the eyebrows would go up once people noticed that he no longer had any. I knew that I would have to make this fight against cancer public, and I knew that I would have to fight as a feminist.

But how does a feminist fight against cancer? First, she makes a playlist because every battle needs a fight song. Of course, Destiny Child’s “Survivor” is at the top of my list.

During cancer treatments, I wrote from my body and for my body. I wrote as if prayers could replace the strands of hair that fell out in the shower after my curls became a victim of chemotherapy. I wrote as if the syllables could dry my tear-stained face. I wrote and pretended that the dark spots on my tongue, nails, palms, and soles of my feet were ink stains.

I wrote as if adjectives could restore my taste buds, allowing me to taste hot, salty, and sweet once again. I wrote as if the vowels and consonants could calm my constantly queasy belly. I typed even when hand-foot syndrome made it almost impossible to hold a pen or touch the keyboard with my fingertips.

When faced with a disease like cancer, fighting for your life is not simply about fighting to stay alive. You’re not just trying to keep your heart beating from one day to the next. When you feel like cancer is taking away every goal and dream, you’re struggling to remember who you are.

So I write. With Beyoncé’s “Find Your Way Back” ringing in my ears, I write in journals, essays, poetry, blog posts, and even in the Notes app on my phone.

I write my way back to myself and share my words with my sisters so that they, no matter what battle they are fighting, can also write their way home. 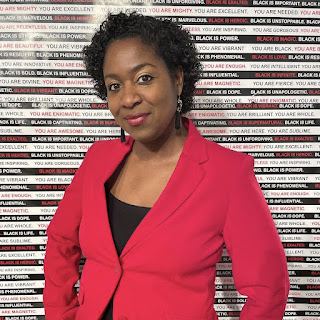 Javacia Harris Bowser is an award-winning essayist and journalist and the founder of See Jane Write. A proud graduate of the journalism programs at the University of Alabama and the University of California at Berkeley, Javacia has written for USA Today, HerMoney.com, and Good Grit magazine. Named one of Birmingham’s Top 40 Under 40s, she believes we can all write our way to the life of our dreams.