It’s not exactly shocking news at this point that the cloud infrastructure market had another standout quarter. After the big three vendors — Amazon, Microsoft and Google — reported earnings this week, we were once again provided a big result with Synergy Research estimating that the market reached $53 billion for the quarter, up 34% from the prior year.

Perhaps the most surprising thing about these numbers is that Microsoft is creeping ever closer to Amazon, the long-time market leader.

Amazon has steadily controlled a third of this market for years. Of course, it’s important to understand that the Seattle-based e-commerce giant has maintained a steady percentage of a foot that is dramatically expanding. Microsoft, on the other hand, has been growing slowly but surely over time. This quarter the company accounted for 22% of public cloud revenue, according to Synergy, up from around 20% in the year ago period.

Amazon pioneered the public cloud market in 2006 and was out there all alone for years before Microsoft began competing in earnest, especially after Satya Nadella came on board in 2014, and has pushed closer to Amazon in recent years.

The last of the big three, Google is working hard as well, and has now cornered around 10% of the market. In fact, the research firm reports that the three companies account for 65% of the entire cloud market. 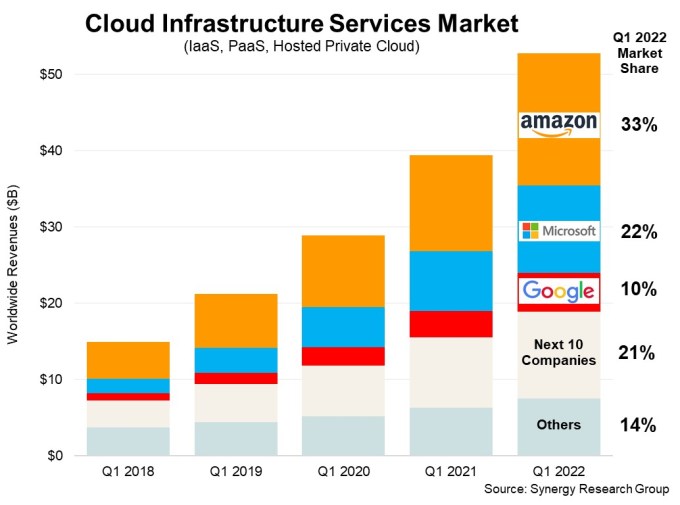 Yet even with Microsoft’s hard push into the market and impressive growth, when you add up Microsoft and Google’s growing market share percentages, Amazon still controls a tick more than the other two combined. It shows the amazing staying power of first-to-market advantage, even when you have well-capitalized giants competing with one another. And it also speaks to Amazon’s ability to fend off the growing competition to this point.

Numbers from Canalys were right in line with Synergy’s, with the total coming in a tad higher at just under $56 billion. The differences are due to the models and formulas each firm uses, but they are close enough that the divergence barely matters.

As for market share percentages, Canalys had Amazon at 33%, Microsoft at 21% and Google at 8%, again with very slight differences from Synergy.

These companies are looking at revenue from infrastructure, platform and hosted private cloud services. Neither is counting software as a service (SaaS) in these numbers, which could account for differences in reported numbers.

The numbers here are so large that it’s easy to forget just how big the public cloud market really is. The category is on an astonishing $212 billion run rate (using Synergy’s number) and continues to grow at a surprisingly rapid rate as more companies push more workloads to the cloud. Consider that total revenue last year was $178 billion.

Growth has accelerated since the pandemic hit in March 2020, and if you believe the numbers out there, cloud adoption still has a long way to go, especially when you consider many companies are adopting a multi-cloud strategy. The growth can’t go on forever, but considering that the need for cloud services isn’t a finite amount, it’s likely it will continue to experience substantial growth for quite some time.